Hiiiiiii - Ella helloooo!!!! Shoutout to my fav kpop groups TXT, BTS, TWICE, DAY6 and BLACKPINK. (Stray kids are also really good) and also to iu, zico and NIve cuz they're really good singers/rappers. damn they're all amazing - i inspire to be like them ok byeeeeeeeeeee - Isabelle shoutout to tg - Bella Hey total girl it’s ari, just wanna thank u for mentioning me in ur mag ! - Ariana Shout out to Olivia rodrigo I love her so much - Darbi I love all the magazine's my favorite part about it is the jokes and the zodiac sign I love to read every magazine each month new ones come out and can your please make one about chase Hudson please all the storys are awesome xx ruby - Ruby i would like to give a shoutout to my sister she is so amzing i love you -bella - Bella Hey TG! I 💖 your magazine!!, - Georgia Shoutout to my bffs - maddy - Laura Heyy!! I love your mags! I buy them every month! I love the dream smp :) - Ella TG's Claire reviews The LEGO Ninjago Movie. Was it blocktacular?
Claire TotalGirl
Hey TGs,
OK, I love LEGO. Don't you? I love the colours, how you can build anything your heart desires and of course I love minifigures - the blocky little people who are too cute!
So I was psyched to go to the premiere of The LEGO Ninjago Movie in Sydney. I ran into this cool guy... 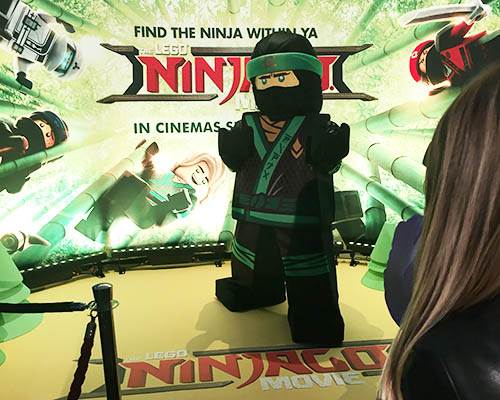 The movie had waaay more LOLs than I had foreseen. It's hilarious if you like martial arts movies and even if you don't. Truly, it's a giggle per minute and I can't stop singing this one silly song. Is it the new 'Everything is Awesome'? It might be!!!
In this flick, Lloyd, a teen boy, is troubled. He's troubled by how much everyone dislikes him and that most of this dislike stems from his super-bad dad, Lord Garmadon. Garmadon's crazy villainous ways are a threat to the city Ninjago. Can Lloyd and his pals, also secret ninjas, defeat Garmadon? Can Lloyd come to terms with having a four-armed papa who never says his name correctly (he always sounds both L's in 'Lloyd')? Will peace ever return to Ninjago? You'll have to watch the movie to find out, but I think you'll find it's a whole heap of fun. My fave character is Master Wu, voiced by Jackie Chan. He has some of the best lines in the movie and there are quite a lot of great ones.
Are you going to watch The LEGO Ninjago Movie? Let me know in the comments what you think!
xo Claire