I love this - Raj shout out to all the people that love dogs!!!!! - Autumn you guys make my life interesting tysm! sophie xxx - Sophie I LOVE UR MAGS TG!!! love, Laurel (PS my b'day's in September! i'll be 10!! you're awesome!!!) - Laurel This is a shout out to my BFF Lila! We aren’t going to be at the same school anymore and I’m going to miss you a lot! - Emma Love all your magazines, keep doing what your doing! - Emi Hey tg I love your mags -gracie💖 - Gracie Hi TG! I love your mags! Shoutout to my BFFs Luella, Maddie and Livina I love you guys so much - Ella reese you are the best friend i love you tg - sierra I love reading Total Girl! - Sophie Meet The Descendants of Disney's Villains

These are the characters from Disney Channel’s new movie Descendants!
Staff Writer

Did you ever wonder what the life of Disney’s villains was like behind the scenes? Well turns out they all have families, and their children are high schoolers! Introducing Disney Channel's new movie, Descendants, about the lives of four Disney villain descendants! 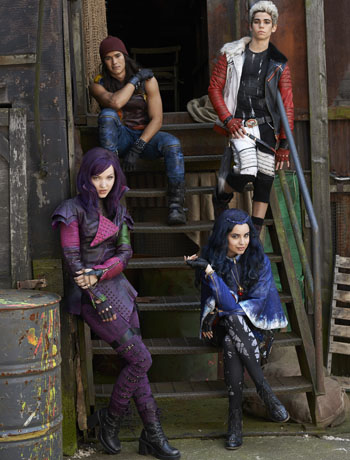 One of the characters of the movie will be Mal, daughter of Maleficent from Sleeping Beauty (and also played by one of our faves, Dove Cameron from Liv and Maddie). She seems like she’s gonna be feisty and maybe even the ring-leader of the teen villains! Plus, we love her purple hair.

Then there’s Evie, daughter of the evil queen in Snow White, played by Sofia Carson! She may seem glam, but she’s sneaky and scheming, so don’t be fooled…

Jay is the son of Jafar, the villain from Aladdin, and he’s proud of his dad for having great style and being the ultimate trickster. But how’s he gonna fit in at school?

Finally, Carlos is the son of Cruella DeVil from 101 Dalmations, but he hasn’t quite got the same fearsome personality as her!

You can watch Descendants on Disney Channel, Saturday August 1 at 7pm.

this is awesome descendants was my new fav movie