I SO hope l get the Karma’s World prize - Dixie OMG! Hi TG! Your mags are the best it is my dream to be in one! U are all so positive! NVR STOP MAKINGTHE BEST MAGS IN THE WORLD! - Willow <3 i love ariana grande she so cool she my fav - wendy l Your Mags are Amazing 🤩 - Asha H Shoutout to: Bella, Hannah, Alana, and Danisha. Thanks Girlies!:) - Kayje L Hiii me and my sis are reading ur mags right now!!! And can u plz put in a hunger games poster I love it so much. ❤️ 🍞 🏹 - Anna potato ?? I've been collecting your mags since 2020 -Erin<3 - Erin I ❤️ Total girl and I want to give a shout-out to them for creating these amazing mags - Sophie I absolutely love Total Girl! - Lily L Shoutout to my friend Caitlin! (Who also goes by Chrissy Wake Up) - Sadie H 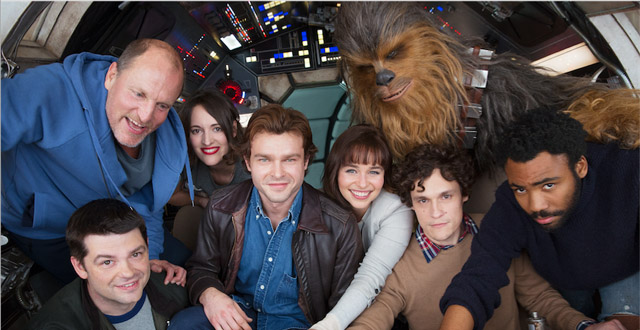 Hey TGs!
Swashbuckling - it's a word I don't get to use nearly enough! Now that I've seen Solo: A Star Wars Story, I can - that is one swashbuckling adventure movie.
So as you may know, it's set, er, a long, long time ago in a galaxy far, far away. So long ago, in fact, that Han Solo is a young dude who hasn't even met Chewbacca yet, or set foot in the Millennium Falcon. For those who don't know, Alden Ehrenreich is this movie's young Han, as opposed to Harrison Ford, who is vintage Han.
Han wants to be the galaxy's best pilot, like the boss of the air. When he is separated from his fave gal Qi'ra (Emilia Clarke), cue a series of daring escapades in which he must team up with the Wookiee we have all come to know and love, and have epic adventures as he tries to find his way back to her.
I thought the flick had a great sense of humour and was terrific fun. Fans will want to get amongst because it has a lot to offer: spectacle, cool, hilarious aliens, adventure, love and two of the best pals space has ever seen.
Solo: A Star Wars Story is in cinemas 24 May.

The TG Fantasy Movie Awards: vote now for your fave!