Hi TG, shout out to your crew for your wonderful mags their awesome never stop making them ❤️ - Jessika Shout out to my BFF Ali we both collect these awesome mags! - Isabelle Total girl is cool 😎 ❤️🧡💛💚💙💜🖤🤍🤎❣️💕💞💓💗💖💘💝 - Samaira I lovvvve this website - Kayley hi TG, could you please make a mag all about Emma Watson? also I love your mags so much, thank you. - Anna To my best friends E-R, Bella and Abby, You guys are the best!!!💞💕 - Charlotte Hey y’all - Betty shout out to my Aunty Marlie for getting me hooked on to TG mags they are tottaly awesome :) <3 - Jarmia-Maree Hi Tg!🙂 I just wanted to say to your team you're amazing!😃 I have basically got everyone of your magazine's! I love them.❤️ Thank you so much for making them!😉 Thank you Tg! Bye!👋 - Kylie Total girl is cool 😎 ❤️🧡💛💚💙💜🖤🤍🤎❣️💕💞💓💗💖💘💝 - Betty

Leading up to 5SOS rocker Ashton Irwin’s birthday celebrations, he decided to pay a trip to Taronga Zoo in Sydney!


The band has just finished touring Australia and New Zealand, so Ashton was enjoying having some downtime in his hometown.


Ashton loves animals, so he thought the zoo absolutely ruled, and he got some pics with the animals…including this totes adorbs possum! 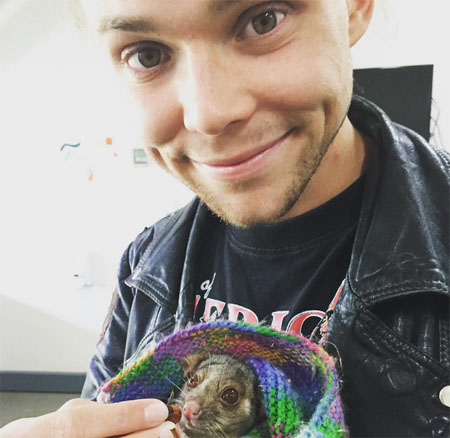 Ashton said that he thinks they look exactly alike!


What do you think? Does Ashton look like the possum? Tell us in the comments below!

so funny you DO look alike! hahaha :)

Yes! I think that he most definitely does! :)